Burning Up: How to Handle Placing Concrete in Hot Weather 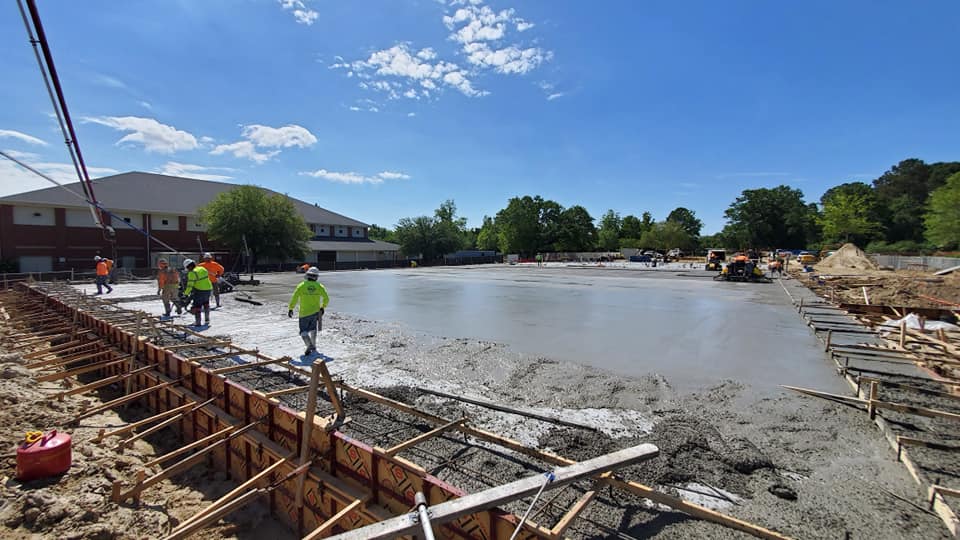 As summer begins, daily temperatures are on the rise, which can cause difficulties when placing and finishing concrete at job sites. Temperatures above 80 degrees mean a faster setting time, the potential for more crazing and plastic shrinkage cracking, slump loss, increased water demand and strength loss for the final product.

However, there are simple ways that suppliers and contractors can prevent these types of problems, even when the high is above 90 degrees.

For example, so that all parties are on the same page, contractors can call a pre-construction meeting with their supplier to go over what the environment for placement is going to be like on the scheduled day, and what the restrictions and temperature allowances are. They can also schedule early morning deliveries so that supplier trucks aren’t pouring when the heat is at its peak during the middle of the day.

Knight’s Redi-Mix is accustomed to this practice and often perform 1,000-yard pours in the early morning hours to preserve the quality of our product.

Contractors can further influence the site’s environment by having forms ready to go upon the truck’s arrival, dampening or placing a vapor barrier on the subgrade and, if practical, setting up temporary wind breaks and sunshades.

Meanwhile, suppliers can dampen aggregates at their batch plants, keep equipment and materials out of the sun, monitor the concrete’s temperature before leaving the plant and during travel, and add water or ice to the mix without going above the water content specified in the mix design.

When temperatures start to rise, Knight’s Redi-Mix puts all of these practices into place, but we’ve also implemented other precautions as well.

“We’re using well water, which comes out of the ground at 55 degrees, that’s lower than a municipal water source’s temperature,” Brian Sheffler, Vice President of Technical Sales, says. “And we have a light-colored drum, which reflects sunlight, so we can confidently tell you we’re going to arrive on the job in-spec.”

Knight’s Redi-Mix is accustomed to pouring in the heat.

Plus, our plant locations are situated to try and decrease travel time to job sites to keep temperature fluctuations low.

But once at the site, time is of the essence.

“The cements in this market at 70 degrees, which we consider to be a median temperature, take about six hours to reach initial set,” Sheffler says.  “If you take that and go 20 degrees higher, it’s going to take roughly two hours and forty minutes to set.”

To buy some time, mixer drivers can promptly discharge their load, and contractors can have more workers on site to place and finish the concrete.

Knight’s Redi-Mix Dispatch offers this product during the summer months to customers when they first place their order. Although we suggest it’s use, the customer must determine if they want to use set- controlling admixtures.

Another way to reduce moisture loss is through using curing compounds in combination with an evaporation retarder.

“After you reach a certain level of moisture being out of the slab, you can come back and put a curing compound on it to help reduce further moisture loss,” Sheffler says. “You should seal the surface; you should always cure the concrete.”

Reducing moisture loss throughout concrete allows for the cement particles to hydrate for a longer period after initial set and results in a stronger final product, even in the sweltering heat and humidity of a South Carolina summer.