While Veterans Day is set aside on the calendar as the day to recognize soldiers for their service, Americans have a lot to thank veterans for every day. Throughout our nation’s history, they’ve kept their oath to defend the Constitution, every American and ensure our country can keep its way of life.

However, it’s no secret that it’s often difficult for veterans to find a steady, secure jobs after they depart honorably or retire from active duty.

They have the disadvantage of not having a large professional network within the civilian sector, which LinkedIn lists as the way that 70 percent of job seekers find new positions. And while they may have gained medical or technical experience while enlisted, matching that up within the private sector is a struggle. Especially if candidates don’t have the proper licenses or credentials, and a company isn’t knowledgeable about military terminology or what different Military Occupational Specialties entail.

Additionally, there is the negative stereotype of veterans with former military service having PTSD.

“It’s probably one of the biggest job disqualifiers because the companies don’t understand what PTSD is,” Keith Anderson, Knight’s Companies Recruiter, and former U.S. Army First Sergeant, says. “It doesn’t make the service member crazy. They just have trauma based on one thing, maybe two things. But before those guys are released, those disorders are identified and addressed, which allows the Veteran Administration to properly treat our veterans even after they are discharged.”

To ensure a military veteran employee’s success, Anderson says that the biggest thing companies need to communicate is that the environment the veteran is in now is not the one they just left. Also, allowing veterans to take time to go and seek help for their condition is paramount.

“We have quite a few guys here who have deployed, have been across that water and seen things that’ll scare the life out of you,” Anderson says. “But they’re still working, and Knight’s takes care of them.”

Once veterans and the private sector work to overcome these challenges and misconceptions, a field that veterans can easily thrive in is trucking.

Many service members use heavy equipment while in action and are technically savvy, like Franklin Nesbitt, one of our Knight’s Redi-Mix drivers. Nesbitt was in the army for 20 years as an Air

Defense Missile operator and retired as a Staff Sergeant.

“With driving trucks and the jeep in the military, driving a mixer truck wasn’t a total shock to me when I retired,” Nesbitt says. “Matter of fact, I got my CDL through the military.”

Nesbitt’s path to post-military employment is not an uncommon one.

The Post 9/11 G.I Bill has approved trucking schools where veterans can gain the experience they need and have all their tuition and fees paid  for them. Likewise, the Federal Motor Carrier Safety Administration Military Skills Test Waiver Program gives veterans a fast-track to acquiring their CDL by using the experience they gained in the military to exempt the license’s road test.

Knight’s Companies has been discussing the possibilities of connecting with the  Army Pays Program to guarantee enlistees, that are seeking skill sets that match our industry, an interview upon their departure from the Army. Although, they must be honorably discharge. Plus, we have the advantage of having Keith Anderson on staff. 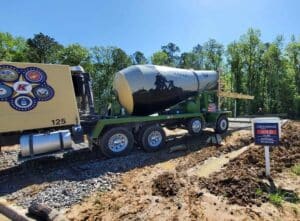 “Liberty” is locked, loaded and ready to go out on site.

“We’ve hired quite a few drivers just by me being here and being a former Army Recruiter, looking at those DD214 records, and lining the truckers up with our open positions,” Anderson says.

Additionally, Anderson says whenever veterans reach out to him looking for employment, or vice versa, they quickly open up once they realize he’s former military, too.

However, along with lining up technical skills, there are plenty of soft skills veterans possess which suit trucking.

They’re accustomed to long days and staying alert and vigilant, which makes for safer drivers and an overall safer fleet out on the road. And a strong work ethic that is mission-focused corresponds well with shipments needing to get places on-time to complete the overall goal of keeping a construction crew on-schedule.

Anderson and Nesbit both agree that discipline is the #1 trait veterans learn throughout their time in the military that helps them later in the professional world.

“Due to my military experience, I never was like some of these guys who went to different companies or went came back and forth,” Nesbitt says. “I’ve stuck with Knight’s the entire time.”

And Nesbitt isn’t alone. Currently, out of Knight’s Companies entire workforce, 15 percent are former or National Guard/Reserves military members. But Nesbitt is the only one who gets to drive “Liberty,” our military appreciation truck.

“I take good care of her because I’m not only representing myself when I’m driving,” Nesbitt says. “I’m representing the company and the military.”

And to Knight’s, “Liberty” represents a way for us to say thank you every day to all the men and women who faithfully serve our country.