In 2017, Knight’s Redi-Mix received the Irmo Plant through the acquisition of Palmetto Builders Concrete. However, even then, the plant had suffered a lot of wear and tear over the years. In the short-term, KRM Midlands spent money to keep the plant running, but it knew in the long-term a major overhaul would have to take place.

“The only things we kept were the original silos and the radial stacker,” Kirk Purvis, Plant Maintenance Manager, says. “All the other parts we built in-house: aggregate bins, aggregate batcher, the charge conveyor, water holding tank, water batcher and the cement batcher.”

Since this is the fourth plant Knight’s Companies has erected using all in-house staff, there weren’t any bumps along the road. 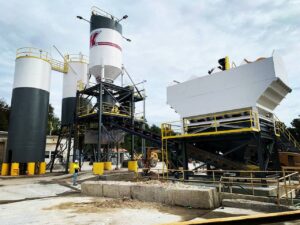 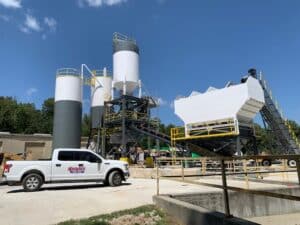 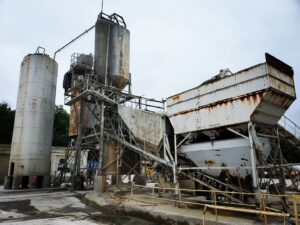 “Working on plants is just like an orchestra. Everybody lines up, plays their part and we try to keep everybody in tune,” Purvis says. “And, Knight’s is fortunate to have a good group of guys who have a broad knowledge base to tackle various projects.”

Upon completion, not only did the Irmo Plant look amazing, it also had double its original production capability.

“Before, they were having to double batch to get a normal ten-yard load,” Purvis says. “Now, because we doubled the size of the cement batcher and added another aggregate bin, they can do a single batch and save two to three minutes on each load.”

Having the Irmo Plant at the top of its game was a big step toward ensuring KRM Midlands was serving its customers to the best of its ability, but Irmo alone wasn’t enough to keep up with growing demand. So, throughout 2020, Knight’s in-house construction, fabrication and plant maintenance crews were working on a Lexington Plant, too.

KRM Midlands’s Lexington Plant was originally obtained through the acquisition of Winnsboro Concrete. Like Irmo, it needed some tender-love-and-care, but Purvis and his team members brought it up to snuff and then Knight’s Trucking transported it to its current location.

“We bought a brand new silo for the Lexington Plant, but probably 75% of it is originally,” Purvis says. “However, it still took a lot of manhours and help from within the company to transport the remaining and new pieces.”

Purvis says with the Lexington and Irmo Plant firmly established in the Midlands, it’s time to look toward a new market.

Since 1969, Knight’s Companies has offered septic, ready-mix concrete, precast concrete, trucking and concrete pumping services to commercial and residential customers in South Carolina and Georgia. It is a family business focused on winning together by always striving to bring its best to its customers and communities. Visit their website at www.knightscompanies.com to learn more.