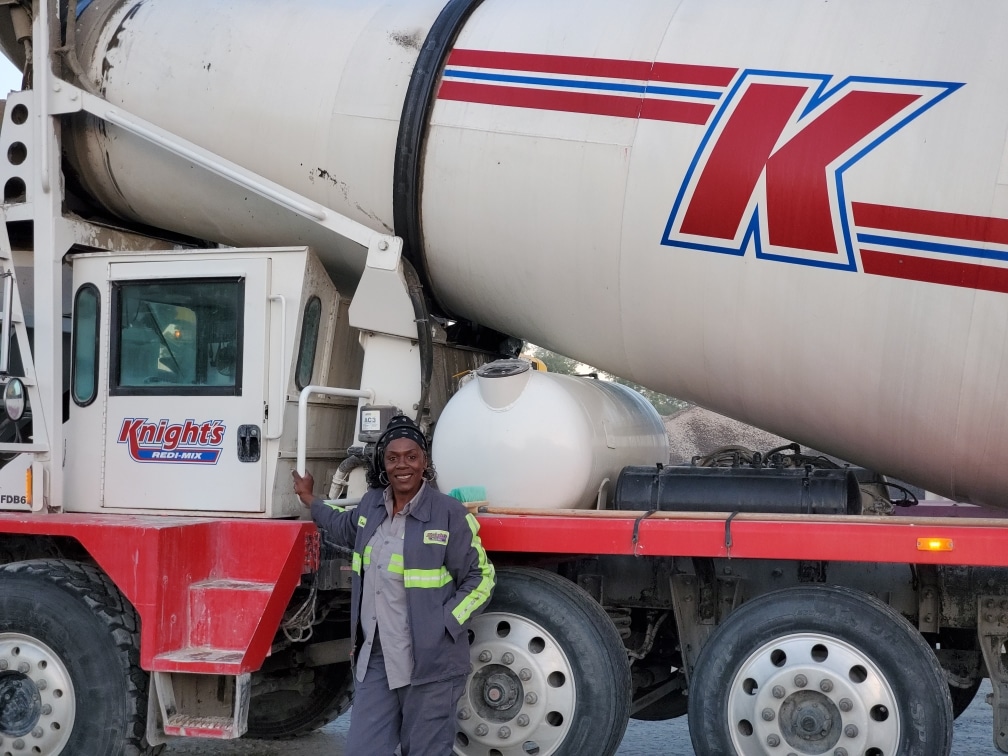 It takes a long time for mindsets to change.

In 1920, women won the right to vote in the United States. 50 years later, they campaigned and marched in the streets to become an equal share of the American workforce, and at the beginning of 2020 they succeeded in that goal.

However, in that same year, the United States Bureau of Labor Statistics estimated that only 6.7 percent of truck drivers are women.

And as many older drivers start to retire, there could be a driver shortage of 160,000 by 2028 according to the American Trucker Association’s Driver Shortage Report. Many people believe that an influx of female drivers could solve this problem, but there are a lot of obstacles to overcome before we get there.

For example, Knight’s Redi-Mix and Trucking are local companies that only operate in the state of South Carolina and Georgia, so none of our drivers are doing tremendous cross-country long hauls. Furthermore, most of our ready-mix plants are located to where many of our mixer drivers are only driving, on average, 15-20 miles away from their respective assigned plants.

However, drivers’ work schedules are still incredibly intense, with each shift often lasting at least 10 hours.

Jomonica Foxworth practicing driver training in the mixer truck that brought her to Knight’s, “The Boss.”

Jomonica Foxworth, a Knight’s Mixer Driver in Irmo, says that mixer driver shifts are different than traditional truck drivers by how they’ll have breaks in between large pours, but it would be difficult to have another job or a large family while having this job.

Therefore, Keith Anderson, Knight’s Recruiter, makes a concerted effort to address how long the hours will be.

“I will actually implore the candidate to go back home, sit down with their family and explain to them what they’re going to be doing,” Anderson says. “I keep that honesty there because they’ll appreciate that more than if I tried to sucker them into this position.”

Anderson says Knight’s makes sure before it hires anyone that they have a family care plan set in place to make sure their kids or home life isn’t neglected because of their job. However, as women have continued to enter the workforce they are still often thought of as being the primary caregiver for their children, so there is an extra burden on them in most cases.

But for some mothers, they find the job easier because of their kids.

“The only thing that makes it easier is the fact that they are really excited about what I do,” Tamara Base, Knight’s Tri-Axle Driver, says. “I have three little boys and they usually don’t see female truck drivers, so every time they see a dump truck they go, ‘Oh, mommy, you drive that!’”

There’s also the issue of women not being perhaps as physically strong as men, but having to handle the same large equipment as they do.

Laurie Sanders, a Knight’s Mixer Driver in Jedburg, says she remembers a time when she went to pick a mixer truck chute up from a pile in the yard and having 15 men all waiting to watch her. She could feel the eyes on the back of her neck.

“They watched me pick them chutes up and put them on, but they couldn’t believe I could pick them up,” Sanders says. “But if you want to play ball with the men you have to be able to do what they do, so I did it.”

But for many women, the difficulty isn’t the long hours, being away from family or how difficult the equipment can be. It’s about having the confidence that they can do this job because they aren’t used to seeing themselves in it.

Heather Jumper waves while cleaning out her truck bed with a friend.

For some women it’s easy for them to adjust because they’ve grown up around it their whole lives, like Heather Jumper, another Knight’s Tri-Axle Driver. Her father, grandfather and all six of her uncles were truck drivers, and when she was young she would often go out with them on the road for long hauls.

“I’ve had no training in trucking whatsoever, but when I got in the truck it just came naturally to me,” Jumper says.

However, Brittany Bryant, a Knight’s Mixer Driver in Irmo, had to take time to overcome her fears because she was intimidated at first by the large mixer drum.

“I’m the type of person where I’m not going to let you see me sweat,” Bryant says. “But in the beginning, I had to remind myself that it’s a job and the truck is a machine. You got to work it and don’t let it work you.”

Once women overcome their fears and get used to being behind the wheel, they find that they like being off their feet, working independently, superseding expectations and watching a product being produced right in front of their eyes.

“One day I may go on the lot and dump two loads of fill, and then come back a week later and the framing of a whole house is put up,” Base says. “It’s pretty neat to see how things start off from one thing to another, and it’s something normal people wouldn’t see.”

Likewise, company culture is extremely important, and we try to promote trust among all of our employees.

“It’s more like a family here, lots of brothers and sisters, and we try to help each other out a lot which is what I love,” Foxworth says. “There’s no drama and everybody is just for each other; it’s a very positive energy.”

And while truck driving isn’t for everyone, maybe it’s time we saw an increase in that 6.7 percent.