It’s very rare in life that people ever meet someone who is a true hero, let alone work with one every day. You wouldn’t know it by looking at him because he seems like a happy-go-lucky guy, but Billy Kilcoyne has stared down the face of death more than once.

Kilcoyne is a Knight’s Redi-Mix Plant Manager now, but prior to that he was a fireman for 30 years and the engineer for Station 6 on Cannon Street the night of the Sofa Super Store Fire.

“We were the seventh engine company to arrive. When we pulled up, I said, ‘Jesus, this is gonna hurt.’ I could just tell from the smoke,” Kilcoyne says. “It was just pouring across West Ashley and Savannah Highway, but you got to go in. You ain’t got no choice.” 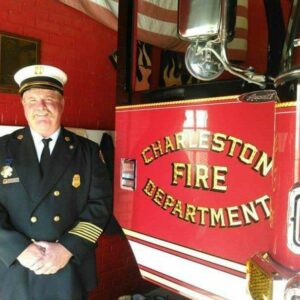 Captain Billy Kilcoyne retired from the Charleston Fire Department after 30 years of service and then joined Knight’s Redi-Mix.

Kilcoyne went in later than the other two members of his crew with a pike poll, a tool that firefighters use to open up areas with entrapped flames. He followed the hose line to the back of the store, split off from the other firemen at the scene and started poking at the walls and ceiling tiles to bring out hidden flames.

It was then that he started to get the sense that things were going wrong.

Out of the smoke three firefighters emerged and collided with him, all three of them screaming, ‘I’m running out of air!’ As quickly as they came, they all disappeared. Kilcoyne tried to run after and catch them, but he ran into a piece of furniture and fell behind.

Most would think that the reason the Sofa Super Store Fire was so difficult to manage on the inside was because of the lack of visibility, but Kilcoyne says that’s not the case.

“Whenever you go into a housefire the only senses you can use is touch and sound,” Kilcoyne says. “The furniture is how everybody got turned around.”

In a normal housefire, there are pieces of furniture connected to each room which give firemen a way to discern the layout of the building. A kitchen table here, a toilet there. But in a furniture store, that frame of reference is completely taken away.

“Everything feels the same, so they got lost and more lost until they were gone,” Kilcoyne says.

He was so lucky because he kept being able to find the firehose within the store.

Once Kilcoyne found the hose using this technique, another panicked firefighter immediately ran into him, but this time he wasn’t getting away. Kilcoyne locked his hand on him, and after a moment of confusion, led both of them to safety by following the hose.

After Kilcoyne assured himself that the other firefighter was okay, he turned around and went back into the building. By complete chance and against all odds, halfway back in the store, he found the two other members of his crew: Mark Davis and Thad Morgan.

Davis was already running low on air supply, and Kilcoyne started to lead them both out of the building as he had done before.

“As soon as we came out, the fire comes right behind us, right over our shoulders,” Kilcoyne says.

Him and his crew were the last three men to make it out of the Sofa Super Store alive that day. Those who never made it back would become remembered as the Charleston Nine.

Nobody knew that there were that many men left inside until they started to search for the body of Capt. Louis Mulkey, one of Kilcoyne’s close friends. Kilcoyne was on the team sent in to search and recover the body and remembers the confusion after they found someone who wasn’t Mulkey.

“Then they were out front calling row on who’s missing, so we got a message back to us that there may be three,” Kilcoyne says.

Three turned to five, and eventually it settled on nine.

After the fire, Kilcoyne stayed on and eventually retired as a captain from the Charleston Fire Department five years ago.

After Kilcoyne saved three people in the Sofa Super Store Fire, the Charleston Fire Department named an award after him. It’s given to the top recruit in each class.

“He’s not a quitter and he’s going to see the job through to the end,” Honour said. “I can’t imagine going back and doing that job again after what he went through, but that speaks volumes to him.”

Kilcoyne never asked for any type of recognition, but six years ago he received the Medal of Valor and the Liberty Mutual Firemark Award for what he did that tragic night. There is also an award that goes to the top recruit within the Charleston Fire Department that is named after him.

However, someone talking to Kilcoyne would normally never find any of this out. According to Honour, only half of the mixer drivers he manages knows he was even at the fire that night, but they respect him for different reasons.

“I think him, originally being a mixer driver, and having that experience, is one of the best aspects we have over there,” Honour says. “He’s been in their shoes, and he really cares about his drivers.”

But Kilcoyne never really left the fire department or what happened the night of June 18, 2007, behind.

“It’s always on the backside of my mind,” Kilcoyne says. “Everybody takes stuff differently, but the way that I did it was that I knew all nine of those guys wouldn’t want me crying every day, going crazy or taking pills to make myself feel better. They wouldn’t want that, so I’m not going to do it, and that’s how I get by.”