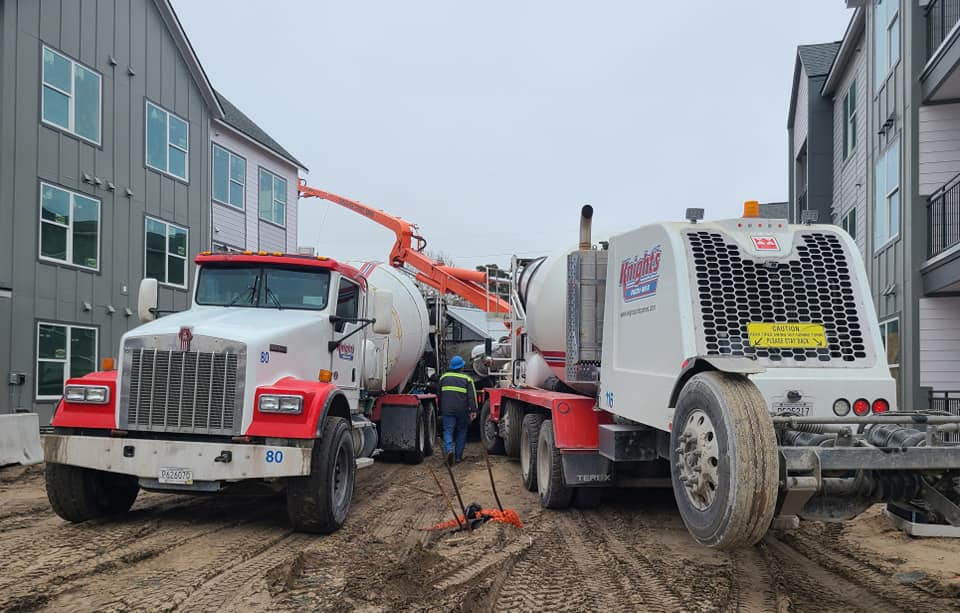 Baby, its cold outside! Just like hot weather, cold weather effects the setting characteristics and strength of concrete, too. Once average daily temperatures fall below 40 degrees more than three days in a row, contractors and suppliers should start taking the necessary precautions to prevent a placement from being affected.

There are ACI guidelines specifying what minimum and maximum temperature concrete should reach based on the thickness of a structure. During cold weather, a placement should be monitored to make sure it doesn’t slip below the minimum temperature before the concrete’s chemical reaction starts to generate heat.

“Like today for example, 55 degree concrete goes onto a 35 degree subgrade, and the concrete needs to reach an equilibrium with the environment before the tri-calcium silicate in cement can generate heat,” Brian Sheffler, Knight’s Vice President of Technical Sales, says. “So the concrete’s temperature is going to drop, and heat generation is going to take time because now it’s 45 degree concrete, so you end up with extended setting characteristics.”

Sheffler says on a perfect, 70 degree day concrete will reach initial set after six hours. But on a day like the one described above?

“It’s going to take 10.5 or 11 hours. So the concrete they placed this morning, they’re probably getting the finish on in the late afternoon,” Sheffler says.

Luckily, there are ways to help speed things up. One is to have heated water in a mix, which better controls concrete temperatures, prevents early age freezing and decreases the setting time.

Suppliers can also add chemical accelerators to the mix to accelerate setting and strength gain. There are two main kinds: chloride and non-chloride accelerators.

Sheffler says chloride-based is very effective, but should not be used if there are steel reinforcements in the concrete because it’s corrosive to steel. Therefore, when there is steel in the concrete, non-chloride is appropriate.

Knight’s Dispatch can easily add either of these two admixtures or hot water to an order if a customer requests it.

Also, Sheffler says to keep in mind that chloride-based accelerators will retard the iron oxide compound in cement, leaving the surface with a mottled look. So, if a placement is going to be decorative or highly visible, this may be something to consider.

Another unsightly problem is a scaled surface caused by freeze-thaw cycles, which occur even in the Southeast. 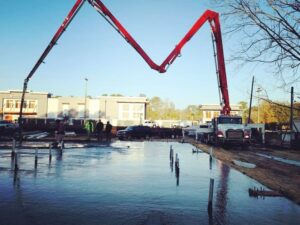 When placing an external slab during cold weather, it’s best to use air-entrained concrete.

To prevent scaling, Knight’s Quality Control recommends specifying air-entrainment in a mix design for an exterior slab. Because the entrained air bubbles create voids that act as safety capsules when the water in concrete freezes, a slab can withstand the movement from freeze-thaw cycles and remain unaffected.

Additionally, the more freeze-thaw cycles an area is expected to have the higher the air content. For example, in South Carolina 4.5 percent is what’s normally specified, but in North Carolina it’s 6 percent.

Thermal cracking is another cosmetic issue common during cold weather, which contractors can easily prevent.

After concrete has been placed inside a form, cover it with a plastic sheet and straw or a blanket to create an insulation system that quickens the setting process and protects the slab from the elements.

Once the slab reaches initial set and is ready for finishing, loosen forms and slowly remove the insulation system to avoid the quick temperature changes that lead to thermal cracking.

If working on an internal slab, another surface-level issue contractors come across are those caused by using excessive heat.

“A lot of times in warehouse buildings you might find a gas-powered heat source blowing across the top of a slab and that top surface can carbonate,” Sheffler says. “If you have a carbonated surface, then that’s where you end up with dusting. It rubs off like chalk on your hand, and you have to treat the surface to get it hydrated.”

To prevent more serious problems, like strength loss, contractors should heat forms so they don’t accumulate ice. Ice will eventually melt when concrete is added and cement hydration starts to generate heat, but its melting will change the water-cement ratio and lead to slower strength gain.

Sheffler says a similar outcome can occur if concrete is placed at a high slump during cold weather because there’s more water in the mix design. Therefore, Knight’s Quality Control recommends placing concrete at the lowest practical slump, and to avoid adding water to the mix on site, throughout winter.